I’ve been up since 4am. Staring at the ceiling. Waiting for an acceptable time to get up and make coffee. So it may very well be my lack of sleep that is making me extra cuddly this morning. Or maybe I’m the normal one and it’s the kids that are a$$wads Sharon.

I once was a magnificent sleeper. Tales have been told of my ability to sleep through the most chaotic of circumstances. When I was much younger than I am now, there arose such a clatter that my boyfriend sprang from the bed to see what was the matter. Away to the window he flew like a flash. Tore open the shutter and threw back the sash. It was a full on police pursuit with K9’s and a helicopter culminating immediately below our apartment. There were lights and sirens and then the use of some kind of loud PA.  I’m told. I wouldn’t know. I definitely slept through that.

I am no longer a sleep champion. I can hear the fish fart through four closed doors. And that quiet little plop startles me and then I’m awake. There’s no going back to bed. I’m up and I’m angry about it. Thanks fish. You’re never going to live the full two weeks at this rate. I’ll tell you how that coin flipped. It’s these damn kids. I have so many of them that my spidey senses tingling can be measured on the Richter scale two states away. I can’t un-agitate myself enough to really fall asleep ever again.

Sometimes it feels like I’m insane. As soon as I have finally gotten them all to go to bed it’s time to start trying to get them awake. GO TO BED! NOW GET UP! Ok, we’re finally all awake. GO TO BED! This bizarre cycle is on a never ending repeat. Sisyphus if you are still out there pushing that rock up the hill for eternity. I’ll trade you. Your work is in every way more challenging and fruitful.

Mr. Nap time is not my only fantasy. Sometimes I stand over my sleeping children and I imagine all sorts of dark yet hilarious happenings. If you are appalled just stay awake for 72 hours and then meet me back here when you are ready for small harmless fire ants in a bucket thrown at their face. Still appalled? You are too rested.

Obviously I would never dump a bucket of fire ants on my children’s sleeping faces. I have a torn rotator cuff. I could possibly just drop the bucket on them. It’s the slow pour that has become impossible. But if you think about it, just dropping the bucket is better because then they they’re like “OUCH a bucket just hit me in the face AAAAAAH IT WAS A BUCKET FULL OF SPICY BOI’S!” That’s a two prong approach and I could still say mom things like “If you would have gotten up when you were hit with the bucket you never would have been stung by my tiny army of Satan’s” which is way more fun than what I say now, “If you would have gotten up the first time I asked, I wouldn’t be asking a second time. See you in ten minutes when I am trying to wake you up again.” 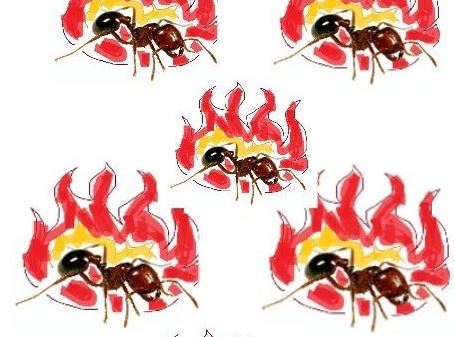 Many of the people in my life have suggested I dump water on my sleeping children which only means many of the people in my life are real a$$holes. Cause that’s a possibility, water is something I have. I don’t have actual fire ants or buckets. I have water. I could do this awful thing you suggest. You’re not supposed to do that to terrorists anymore but hey why not the children? I don’t know why that ruffles my feathers but it does. If anyone ever dumped water on me while I was asleep I swear to bejeejus I would prison shank your bi!@# a$$. Don’t even joke about the water thing. It makes me want to get violent level biblical. Make it rain pain for forty days and forty nights.

I do want to install bluetooth speakers in their bedrooms. All connected to my phone. So at 6AM I could blast a little Quiet Riot into their little angel faces. No. A shrill laugh. Just a perpetual nasally guffaw and cackle. It doesn’t stop. It would start at 6AM and continue relentlessly until they left the house. The only way to escape the madness is get your ignorant a$$ to school you uncultured swine! It sounds too much like a Russian experiment from the 40’s.

I could be truly dastardly and bottle the smell of fresh donuts. Release it into the vents. They would scurry up to the kitchen so excited only to be met with a harsh reality. There are no donuts! Just awakeness you fool! Now that we think about it…Why aren’t we using the nose as a weapon? Aroma can be a  powerful motivator. Smells could be released. Retching could be had. First an audible warning. “Either get your entitled a$$ out of bed now or you and your bedroom will smell of roasted horse farts and dill in 5, 4, 3,.. Febreeze can’t help you now son!” Actually I don’t think that would work on the boy. His bedroom already smells like a dirty locker room. At a sewer plant. With no windows. Used by sick monkeys.

Do you know what I hate? Mealworms. Just the very idea of a mealworm has me on edge. Maybe I should just be whispering trigger words like that through a speaker. If you are dead a$$ asleep and suddenly someone whispers “spiders” you have to get up and turn on the light right? You have to. Or maybe I just play the sound of tiny scratchy feet crawling all over and maybe a little rustling.

I don’t want to do any of these things. I just want to roll over, quietly say “hey” and then that’s enough they all heard me. The whole house. From my bed my quiet little voice traveled to their ears and now they’re all up. Is that too much to ask? I just want to use my inside voice all of the time. That’s what I really want. For Christmas and every birthday and Mothers day for the rest of my existence. I want my inside voice to produce results.

I am fairly certain that if I pulled the fire ants stunt just one time. Just once. All of these children would understand just how precarious my grip on sanity actually is. One bucket of fire ants and they would all learn a mighty fine lesson. My inside voice would have power because they would know without a single doubt. They would know from experience that their mom does not have a middle ground. She goes from inside voice to actual f%$#ing fire ants on your face.

I would also be a hero. A legend amongst mothers. They would write to me in prison.

One thought on “Get the Hose”